Wetlands International new publication “Water Lands: A Vision for the World’s Wetlands and their People” calls for a reinvention of wetlands for the modern world

In the Anthropocene we need the abundance of wetlands as much as we need healthy but we are losing them three times as fast. Between 1900-2000, the world lost almost two-thirds of its wetlands – the bogs, swamps, mangroves, mires, natural river banks, lakes, billabongs, deltas, oases, lagoons, fens, mudflats or floodplains – due to drainage, conversion for agriculture, urbanisation and infrastructure such as dams, dykes, harbours and ports.

The loss of wetlands are at the root of myriad social and environmental issues – from flooding, coastal erosion and subsidence in Indonesia to extreme drought and violent conflict across the Sahel, not to mention tropical and permafrost ‘carbon time bombs’ – yet few are even aware let alone acting in a way that’s needed to make a change.

From the peat bogs of Ireland to the bayous of Louisiana; from the flooded forests of Cambodia to the permafrost of Siberia; from the mangroves of the Ganges Delta to the ‘everlasting swamps’ of the Nile; and from the marshes of the Brazilian Pantanal to the boggy upland pastures of Tibet, wetlands are in-between and ever-changing worlds. Sometimes wet and sometimes dry, sometimes land and sometimes water, sometimes saline and sometimes fresh; they change character with the seasons, or may lie dormant for decades before bursting into life. 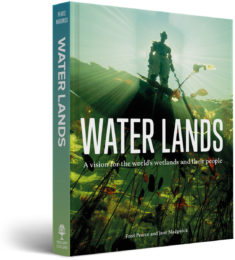