What links climate change, poverty and migration? The Global Landscapes Forum addresses how land-use is central to global challenges that are more interconnected than many of us realize.

What does the politics of how we use land have to do with climate change? And with poverty, conflict and migration? These are the questions being addressed 19-20 December 2017 at an international conference focused on a more sustainable future for our planet.

"Deforestation and changes in land-use contribute around 12 percent of greenhouse gas emissions," Karin Kemper, senior director for Environment and Natural Resources at the World Bank, said, speaking at the Global Landscapes Forum (GLF) in Bonn, Germany.

Deforestation, soil degradation and climate-related drought are exacting a high price on humanity, Kemper told the conference. She cited the 2015 peat fires in Indonesia, which she said caused $16 billion worth of damage. Land degradation cost Burundi 4 percent of its GDP, she added, and Colombia more than 1.5 per cent of GDP.

"The destruction of forests and land comes at a high price, and we urgently need to deal with these issues," Kemper said.

Held in Bonn for the first time, the conference brings together over 1,000 GLF members, including scientists, economists, politicians and activists.

Previously, the conference has taken place alongside the United Nations climate conferences. This year, the GLF made a bid to emerge from COP's shadow.

With global warming still a core concern, speakers underscored that climate change, land use and human wellbeing are all deeply intertwined.

"When forest are cleared in the Congo, in Ethiopia first the rains fail, and then the harvest — with dramatic consequences for the people," German Development Minister Gerd Müller said.

"We need sustainable rural areas which offer long-term survival prospects for nature, and at the same time human livelihoods and income," he added. "We must discuss such approaches to solutions more intensively — the Global Landscape Forum brings the right experts together to do that."

"They can absorb greenhouse gases, making them the three natural green carbon sinks," she said, adding that this was key to meeting the Paris Agreement goal of keeping global warming to no more than 2 degrees. 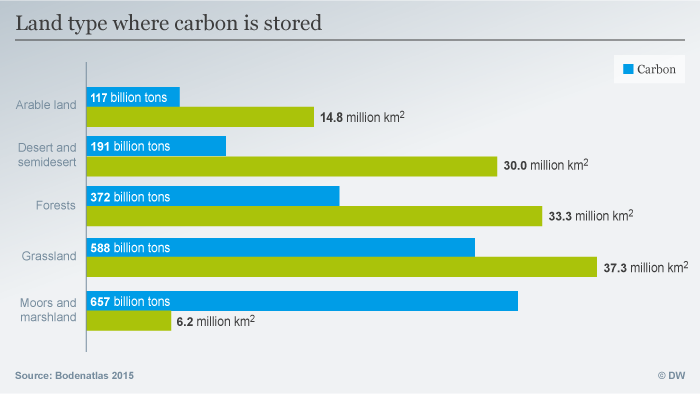 Stefan Schmitz, director of the German government's One World - No Hunger initiative, brought attention to how these issues also impact migration, saying that "70 percent of poor and hungry people in the world live in rural areas — in Africa it’s as high as 75 percent."

Every year, we lose 10 million hectares of fertile land, Schmitz said. "Productive land is becoming an increasingly scarce and contested commodity. The annual loss of natural forests in the tropics is of the same magnitude."

"When hunger, the exploitation of nature and climate change combine, crisis and conflict increases, and the number of wars and refugees also rises," Schmitz said. "These aren't things that will happen in the future — it's already happening today."

The conference stressed global approaches to solving these problems, with sustainable agriculture, education and information as key.

Better soil cultivation could mean more CO2 being absorbed into the ground, and cleaner groundwater. Politics, banks and civil society all have a role to play in creating more sustainable economies, with benefits both for the environment and human prosperity, including job creation.

Erik Solheim, executive director of the UN Environment Program (UNEP), stressed that policies should aim to tackle multiple environmental problems at once.

"Climate, biodiversity, deforestation and changing land-use all belong together, they are the big polluters of the planet — but many people don’t know that," he said. "The degradation of the soils and climate change can be solved at the same time."

Holding back the growing desert

Fertile soil is disappearing, swathes of land are being eroded away. Through its convention on combating desertification the UN is attempting to stop the desert growing and take back the land. (31.07.2015)

Massive amounts of fertile agricultural land are lost every year. Yet we depend on such topsoil as the basis for feeding the world. So, what needs to be done to assure healthy soils and thus food security? (21.04.2015)

Building a wall to keep the desert out

A plan for an ambitious 'green wall' of trees stretching across 11 countries aims to fight back the Sahara. But progress is slow on the decade old project. (20.03.2017)

Fertile soil is disappearing, swathes of land are being eroded away. Through its convention on combating desertification the UN is attempting to hold back these developments. (31.07.2015)

Plenty of desert, little water, not much land for agriculture: Jordan is a country with extreme living conditions. The knowledge of the Bedouins shows us how to handle nature with care. (26.05.2017)