Why trees could bring water back to the Sahel

In the dry stretch between Africa’s Sahara Desert and tropical forests, the landscape has been slowly changing, giving new signs of life in places where there was previously none, or where there once was before the effects of climate change took hold. These are the building blocks of the Great Green Wall, a vision conceived some 30 years ago and formalized in 2007 to create a grand mosaic of green and productive landscapes across the vulnerable Sahel region – linked forests, shrublands, forested farms, grasslands and wetlands stretching 8,000 kilometers across the entire width of the continent. It is one of the most ambitious landscape restoration efforts in history, yet it is shrouded in mystery.

Chris Reij, a Dutch geographer and senior fellow at the World Resources Institute (WRI) has decades of experience in the restoration of degraded land in Africa’s semi-arid regions where the Great Green Wall initiative (GGW) has been ongoing since 2007. To combat climate change and prepare for a future in which the continent will need to support a population more than double what it is today, the GGW aims to create a mosaic of green and productive landscapes stretching 15 kilometers wide and 7,775 kilometers across the Sahel and Horn of Africa.

“Forty years ago, we didn’t know what to do and how to do it,” he says. “Now we do, and there are many big and small sustainable land management successes in the Sahel, which was not the case 40 years ago.”

When Reij began working in the Sahel in 1978, the region was reeling from a long drought that began in 1968 and would last through the 1970s and ‘80s. Rainfall over most of the Sahel had decreased by 30 percent. Scientists describe it as “the most dramatic drought in any region of this large an extent observed in the 20th century.” Over 100,000 people died from food and water shortages.

“We know trees provide many benefits, and there has been some widespread misunderstanding of the role of trees in influencing how a landscape interacts with water,” says Douglas Sheil from the Norwegian University of Life Sciences and a senior associate with the Center for International Forestry Research. “When used in a suitable way, trees can help a landscape capture and store more water than otherwise.”

Read further from GLF Source. The story is the second of a three-part Landscape News series on the Great Green Wall. Read the series:

Part 1: As the Sahel dries, the Sahara advances
Part 2: Why trees could bring back water to the Sahel
Part 3: Will the Great Green Wall’s architecture support its future? 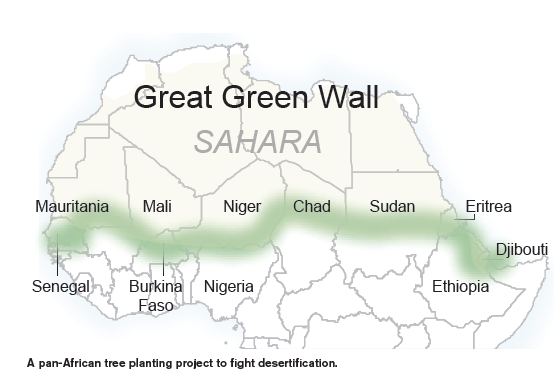