WMO Statement on the State of the Global Climate in 2019

The flagship report provides authoritative information for policy makers on the need for Climate Action.

The report confirms information in a provisional statement issued at the UN Climate Change Conference in December that 2019 was the second warmest year in the instrumental record. 2015-2019 are the five warmest years on record, and 2010-2019 the warmest decade on record. Since the 1980s, each successive decade has been warmer than any preceding decade since 1850.

2019 ended with a global average temperature of 1.1°C above estimated pre-industrial levels, second only to the record set in 2016, when a very strong El Niño event contributed to an increased global mean temperature atop the overall warming trend.

“We are currently way off track to meeting either the 1.5°C or 2°C targets that the Paris Agreement calls for,” said United Nations Secretary-General Antonio Guterres in a foreword.

“This report outlines the latest science and illustrates the urgency for far-reaching climate action.  It brings together data from across the fields of climate science and lists the potential future impacts of climate change – from health and economic consequences to decreased food security and increased displacement,” he said.

Climate variability and extreme weather events are among the key drivers of the recent rise in global hunger and one of the leading causes of severe crises. After a decade of steady decline, hunger is on the rise again – over 820 million people suffered from hunger in 2018.  Among 33 countries affected by food crises in 2018, climate variability and weather extremes a compounding driver together with economic shocks and conflict in 26 countries and the leading driver in 12 of the 26.  In light of this, the global community faces an enormous challenge to meet the Zero Hunger target of the 2030 Agenda for Sustainable Development.

The food security situation deteriorated markedly in 2019 in some countries of the Greater Horn of Africa due to climate extremes, displacement, conflict and violence. By late 2019, about 22.2 million people, (6.7 million in Ethiopia, 3.1 million in Kenya, 2.1 million in Somalia, 4.5 million in South Sudan, 5.8 million in the Sudan) were estimated to be severely food insecure, only slightly lower than during the severe and prolonged drought in 2016-17.

There was exceptional dryness in March and much of April followed by unusually heavy rainfall and floods in October-December.   The unusually heavy precipitation in late 2019 was also a factor in the severe desert locust outbreak in the Horn of Africa region - the worst in over 25 years, and the most serious in 70 years for Kenya. This is expected to spread further by June 2020 in a severe threat to food security.

More than 6.7 million new internal disaster displacements were recorded between January and June 2019, triggered by hydrometeorological events such as Cyclone Idai in Southeast Africa, Cyclone Fani in South Asia, Hurricane Dorian in the Caribbean, and flooding in Iran, the Philippines and Ethiopia. This number was forecast to reach close to 22 million in 2019, up from 17.2 million in 2018. Of all natural hazards, floods and storms contributed most to displacement.

More than 2 200 lives were reported to have been lost in various flooding episodes in India, Nepal, Bangladesh and Myanmar during the monsoon season, which started late but finished with rainfall totals above the long-term average.

The 12-month rainfall averaged over the contiguous United States for the period for July 2018 to June 2019 (962 mm) was the highest on record. Total economic losses from flooding in the United States in 2019 were estimated at US$20 billion.

Very wet conditions affected parts of South America in January. There was major flooding in northern Argentina, Uruguay and southern Brazil, with losses in Argentina and Uruguay estimated at US$2.5 billion.

The Islamic Republic of Iran was badly affected by flooding in late March and early April. Major flooding affected many hitherto drought-affected parts of east Africa in October and early November.

Drought affected many parts of southeast Asia and Australia, which had its driest year on record, influenced by the strong positive phase of the Indian Ocean Dipole. 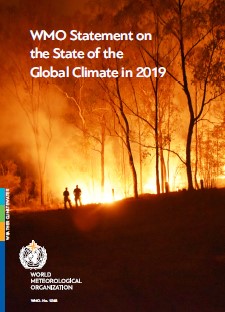