World Social Report 2021: Reconsidering Rural Development launched 26 May calls for an urgent reconsideration of rural development is needed for achieving the 2030 Agenda for Sustainable Development. The current strategies and patterns of rural development are failing to meet either the socioeconomic or the environmental Goals of this Agenda.

Many rural areas are witnessing severe depletion and degradation of natural resources, contributing to climate change and the recurrence of zoonotic diseases, such as COVID-19. The COVID-19 pandemic, together with already persistent high levels of poverty and inequalities, are threatening to stall progress for the world’s rural populations.

The World Social Report 2021, a flagship publication of the United Nations Department of Economic and Social Affairs (UN DESA) on major social development issues offers new strategies to ensure that the:

The report calls for an end to the rural-urban divide and offers new approaches to advance rural development that would allow rural populations to reach the urban standard of living without having to migrate to urban areas.

These include leveraging the rise of :

World Social Report 2021 shows that new digital and frontier technologies are creating opportunities for achieving these goals. What is needed is to seize these opportunities and to convert into reality the long-standing goal of eradicating the rural-urban disparity.

As populations and economies grow, constraints on available land may rise.

On addressing environmental issues, policies need to be directed at

Globally, about half of all countries are engaged in land tenure reform, with over 1 billion farmers already having benefited (IFAD, 2016)

As a result of all three factors, young people are significantly less likely to own land than adults. In sub-Saharan Africa, for example, 1 in 3 adults is the sole owner of a plot of land, while this is true for fewer than 1 in 10 young people

Land is essential for the survival and prosperity of humanity, accounting for roughly 29 per cent of the Earth’s surface (figure IV.8).

The climate goals are thus unlikely to be reached without changes to agricultural practices and food systems, including reduction of food waste and changes in food consumption patterns in urban areas.

Global water consumption is now about 4,500 billion m3 , with 70 per cent used by agriculture.

Investing in land restoration and reforestation

A sustainable rural transformation is needed to achieve the SDGs by 2030.

The World Social Report (previously Report on the World Social Situation) is prepared by the Division for Inclusive Social Development of the United Nations Department of Economic and Social Affairs (UNDESA).

Over the years, the Report has served as a background document for discussion and policy analysis of socio-economic matters at the intergovernmental level, and has aimed at contributing to the identification of emerging social trends of international concern and to the analysis of relationships among major development issues which have both international and national dimensions. World Social Report 2021: Reconsidering Rural Development 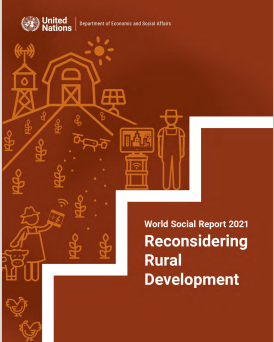