The results of the Peoples’ Climate Vote, the world’s biggest ever survey of public opinion on climate change are published today. Covering 50 countries with over half of the world’s population, the survey includes over half a million people under the age of 18, a key constituency on climate change that is typically unable to vote yet in regular elections. Detailed results broken down by age, gender, and education level will be shared with governments around the world by the UNDP, which organized the innovative poll with the University of Oxford.

In many participating countries, it is the first time that large-scale polling of public opinion has ever been conducted on the topic of climate change. 2021 is a pivotal year for countries’ climate action commitments, with a key round of negotiations set to take place at the UN Climate Summit in November in Glasgow, UK.

In the survey, respondents were asked if climate change was a global emergency and whether they supported eighteen key climate policies across six action areas: economy, energy, transport, food & farms, nature and protecting people.

Forests and Land Use-Strong backing for conserving forests and land in countries with the highest emissions from deforestation and land-use change
The land on which people and nature depend is under threat. When land is converted from wild tropical forests or grasslands into agriculture, industrial areas, or new towns and cities, plants are destroyed which previously absorbed carbon dioxide as they grew. When fires start these also cause large amounts of carbon dioxide and methane to escape into the atmosphere. This means land-use change can, in some countries, contribute to large amounts of GHG emissions. Figure 17 shows the six countries with enough policy preference responses for national estimates that have the highest emissions from land-use change. In both Indonesia and Brazil – by far the largest emitters from this sector in the survey – there were solid majorities in favour of conserving forests and land, at 57% and 60% respectively. The same was true in Argentina (57%) and Canada (79%), which have smaller but nevertheless significant emissions from land-use change.

High-Income Countries-Majority support for 14 climate policies
The Peoples’ Climate Vote found that there was majority support for 14 of the 18 climate policies in the 14 high-income countries surveyed (see Figure 11). The most popular were to conserve forests and land (71%), use more solar, wind and renewable power (68%) and keep the ocean and waterways healthy (68%). These were followed by reducing food waste (64%), building infrastructure and conserving nature to protect people (63%), and climate-friendly farming (63%).One way to help protect forests and land is to support the local communities, indigenous peoples and women who traditionally live in these areas and look after them, of whom there are estimated to be as many as 1.87 billion worldwide. The results indicate that this policy is less well understood by the public as a way to address climate change, compared with direct conservation of forests and land. Nevertheless, out of the biggest emitters on land use change in the survey, it had solid majority support in Canada (60%).

Middle-Income Countries - Support for land conservation, climate-friendly farming, and investment in renewables, green jobs and clean transportation
The five most popular climate policies in the 29 middle-income countries surveyed were conservation of forests and lands and climate-friendly farming (tied on 49% public support), followed closely by investing in solar, wind and renewable power (48%), green businesses and jobs (47%) and more clean electric cars and buses, or bicycles (45%) (Figure 12).

Least Developed Countries - Conservation of forests and land finds majority public support
The most popular climate policies in LDCs were conservation of forests and lands (52%), followed by solar, wind and renewable power (47%), and climate-friendly farming (46%). Every one of the 18 climate policies found less support in the LDCs than overall. Policy support in the LDCs surveyed was 36% on average across the 18 policies, compared with 42% for all countries surveyed. However, support for conserving forests and land (52%) in LDCs was only two percentage points less than the global average. It was also three percentage points stronger than public support in middle-income countries. Another notable finding was that supporting local communities, indigenous peoples and women that are environmental stewards featured in the top ten climate policies for LDCs, albeit at a low level (34% public support). This policy did not have top ten support in any other country grouping.

Arab States
People in the Arab States tended to support a smaller number of climate policies than in other regions, with average overall public support for all 18 climate policies of 36%. The top five climate policies nevertheless had over 40% support, led by climate-friendly farming and using renewable power, each with 48%, followed by conserving forests and land (47%).

Latin America and Caribbean
The average level of public support in Latin America and the Caribbean for all 18 climate policies was 45%. There were five climate policies attracting majority support in the region, led by conserving forests and land (59%), followed by solar, wind and renewable power (57%), and climate-friendly farming (56%). More clean electric vehicles and bicycles won the approval of 52% of people, while investing in green businesses and jobs attracted 51%.

Western Europe and North America
In the countries surveyed in Western Europe and North America, the average level of support was 57%. No fewer than 15 climate policies carried majority support, of which the top ten are shown below (Figure 16). Two nature conservation policies – focused on forests and land, and ocean and waterways – came top, with very high support levels of 72% and 70% respectively. Infrastructure policies were also popular – including solar, wind and renewable power (68%), more electric vehicles and bicycles (58%) and greener freight (55%). There was strong support for economic policies, including investing in green businesses and jobs (61%) and making companies pay for their pollution (58%). Finally, reducing food waste was also popular in this region (64%). 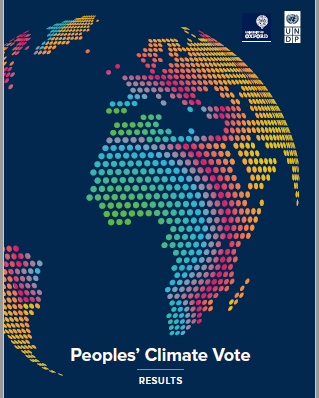