The Ripple Effect: A Fresh Approach to Reducing Drought Impacts and Building Resilience a publication produced by the UNCCD

Over 15 per cent of natural disaster damages and losses are caused by drought. Droughts account for 85.8% of livestock losses and drought is the most lethal natural hazard to livestock (FAO, 2015). The distribution of drought-related losses show high relative losses in Sub-Saharan Africa but Central and South America, southern Europe, the Middle East and southern Australia are also at high risk (Natural Disaster Hotspots: A Global Risk Analysis, 2005).

With the anticipated pressures on water resources and with more intense and severe droughts predicted, a paradigm shift is needed. Poorly coordinated “crisis management” in the face of drought will no longer suffice (Managing drought risk in a changing climate: The role of national drought policy, weather and climate extremes, 2014). A well-planned approach that focuses on reducing the impacts of drought is needed now.

The adoption of national drought policies that are focused on risk reduction and which are complemented by drought mitigation plans at various levels of government will have significant ripple effects across key sectors.

The adoption of these policies supports the implementation of Sustainable Development Goal target 6 – “ensure availability and sustainable management of water and sanitation for all” – by promoting integrated water resources management. The vulnerability to future drought episodes can be significantly reduced and the coping capacity of communities, even entire nations, can be improved.

A proactive approach for enhancing drought resilience is composed of three important pillars: 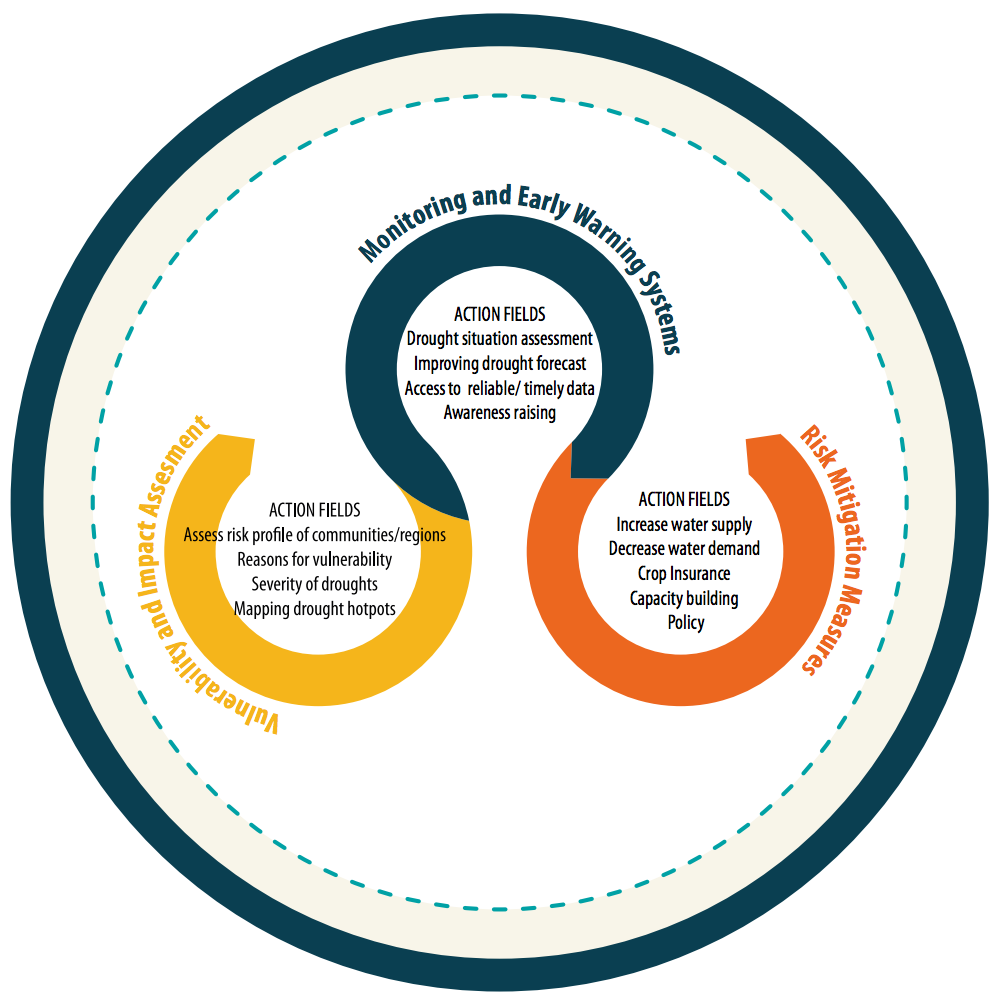 The timing of declaring a drought can often be very subjective and highly political. Forecast mechanisms require quality data and local knowledge to understand how dry conditions will impact water and food supplies. Unfortunately, these predictions are often unreliable and action is not taken until it is too late.

With more research and collaboration, early warning systems could reduce hunger and distressed migration as a result of drought. An Early Warning System (EWS) provides timely and effective information to facilitate action to avoid or reduce the risk of droughts and prepare for effective response. Numerous natural drought indicators must be monitored routinely to determine the onset and end of drought and its spatial characteristics. Although all types of droughts originate from a precipitation deficiency, it is insufficient to rely solely on this climate element to assess severity of drought. Effective drought early warning systems integrate precipitation and other climatic parameters with water information, such as stream flow, snow pack, groundwater levels, reservoir and lake levels, and soil moisture, as well as a comprehensive assessment of current and future drought and water supply conditions. Local knowledge systems, including traditional knowledge of farmers and pastoralists should also be incorporated into the information system (Handbook of Drought Indicators and Indices, 2016).

Occasionally, depending on the location, less rain can be compensated for by access to underground water, manmade reservoirs or moisture stored in soils across forested watersheds. Elsewhere, without these buffers in place, drought rapidly escalates into shriveled crops, dead livestock and, in some cases, hunger and death. No amount of early warning will work without action to protect the most vulnerable; therefore, the second aspect of drought management deals with risk assessment of vulnerable sectors, population groups and regions.

Vulnerability is a condition resulting from social, economic, and environmental factors or processes, which increases the susceptibility of a system to the impacts of drought hazard. Vulnerability assessment is needed to understand “who and what is at risk and why?”

Some of the important features of vulnerability assessment include:

To reduce vulnerability to drought, it is essential to identify the relevant impacts and assess their underlying causes. Information on drought impacts and their causes is crucial for reducing risk before drought occurs and for appropriate response during and after drought. It is important to combine forecasts with detailed knowledge on how landscapes and societies respond to a lack of rain and to turn that knowledge into prompt action within weeks or even days.

There are practical measures that can be taken starting immediately. Both measures and actions – also called drought risk management options – that either build greater resilience to drought or reduce the impacts of drought when it occurs can be deployed. These measures concern all sectors affected by drought, based on their vulnerabilities. However, working with nature and understanding the necessary combination of measures is particularly important for agriculture and for sectors reliant on the availability of water and ecosystems services.

These measures and actions involve approaches promoted by the UNCCD as they involve strengthening natural infrastructure and the integrated management of land and water resources.

Examples of important mitigations measures include:

The management of drought needs a paradigm shift.

The time is ripe for countries to develop and implement effective national drought policies that include all three pillars of drought action. Countries need to recognize that the traditional approach of responding to drought is not viable any more; it has proved to be ineffective far too often.

By being proactive, investing in early warning systems and assessing their vulnerability, countries can emphasize protection rather than recovery. Countries must understand not only where the most drought-stricken areas are, but also who and what is vulnerable and why. Integrated drought early-warning and monitoring systems that capture information on the incidence and severity of droughts can better identify vulnerable population groups and geographic regions. This facilitates early action and can lead to the development and implementation of a wide variety of mitigation actions including better land management to reduce impacts from future drought events.

Lastly, there is a need for greater cooperation and sharing of experience and success stories among countries. Well-planned and coordinated drought action will have a positive ripple effect across sectors and across borders. The poorest and most vulnerable parts of society will benefit the most.